Washington’s population grew by 158,100 people since the 2020 decennial census April 1, 2020, largely due to migration. This means Washington grew to an estimated 7,864,400 people as of April 1, according to annual estimates that the Office of Financial Management prepared.

The unadjusted population growth rate is much faster than last year — 1.3% compared to 0.8% the previous year.

The COVID-19 crisis continues to impact the population estimates. We saw a large rebound in 2021 population counts that stemmed from fewer people living together in group quarters. However, that is not the case in all cities. We found that prison population continued to decline and people living in college housing has not entirely recovered.

Migration continues to be the primary driver behind Washington’s population growth. From 2021 to 2022, net migration (people moving in minus people moving out) to Washington totaled 83,300. This is up by 40,500 from last year. Net migration accounted for 86% of the state’s population growth, with natural increase (births minus deaths) responsible for the other 14%. The state’s natural population increase of 14,100 hit historic lows as births declined more slowly than in recent years but COVID-19 increased the number of overall deaths.

Housing growth remained a strong indicator of population growth in Washington. Despite strong housing growth, we saw high occupancy rates in most cities and towns. This past year, the state added 46,500 housing units, which is 100 more than last year. Of the new units built this past year, 58% were multifamily. More than 71% of all new housing units the past two years were built in one of the state’s five largest metropolitan counties. King County leads all counties with 17,100 new housing units and saw 37% of the state’s total housing growth this year.

Consistent with previous years, over 67% of the state’s population growth occurred in the five largest metropolitan counties: Clark, King, Pierce, Snohomish and Spokane. The eight counties with populations between 100,000 and 350,000 saw 20% of the state’s growth. And counties with less than 100,000 had a 13% share, which was larger than usual due to more people living together in group quarters. Whitman, Kittitas, and Whatcom are the three fastest growing counties, due to returning college students. Otherwise, the fastest-growing county between 2021 and 2022 was San Juan, with 1.7% growth. Spokane followed at 1.6% and then Clark at 1.5%.

The April 1, 2022, population estimate for Washington’s incorporated cities and towns is 5,156,000, which is an increase of 1.6% from last year. The top 10 cities for numeric change, in descending order, are Seattle, Bellingham, Lake Stevens, Lacey, Vancouver, Pullman, Spokane Valley, Tacoma, Ridgefield and Spokane. Seattle’s population increased by 20,100 people for a total of 762,500. For many of these top 10 growth cities, we found that a rebounding group quarter population or annexation was a larger factor in the population increase than new housing growth. 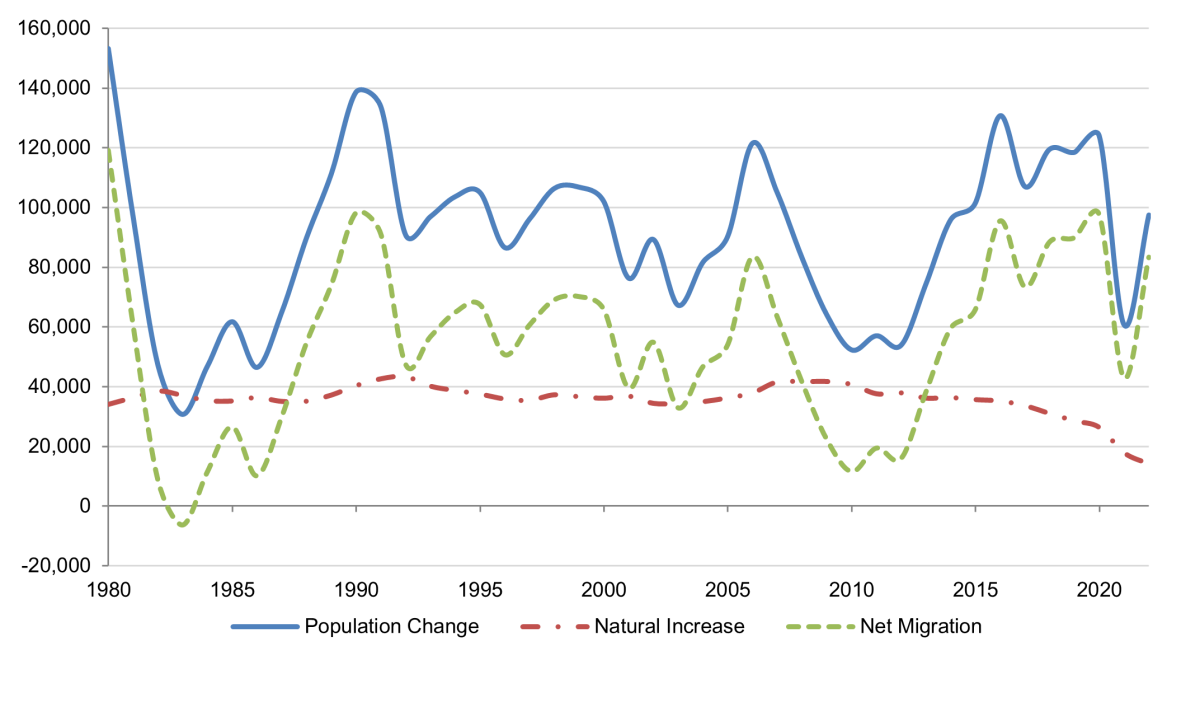